Be careful not to run those yellow lights at two key city intersections in Encinitas, because the City Council just opted to continue the red-light program for at least another 18 months.

I’m not crazy about this program for a couple of reasons:

My original suggestion was to turn off the red light cameras at one of the two intersections, then track the number of accidents there for comparative purposes to determine our course – but that idea wasn’t supported. So I compromised on this short-term continuation instead of the longer contract advocated by two of my colleagues.

When we revisit the program next year, we’ve asked city staff to provide us with comparison data of accidents at intersections where there are no cameras, and provide us the reasons why other local cities have discontinued their red light camera programs.

Encinitas has used the cameras since 2004, and for now they’ll continue to operate at the intersection of El Camino Real and Encinitas Blvd., and El Camino Real and Leucadia Blvd./Olivenhain Road. There are interesting details about who gets these 350 tickets every month (spoiler: it’s usually visitors, not residents).

Details and other councilmembers’ perspectives on the program are in this Encinitas Advocate article.

Leucadia will soon be safer 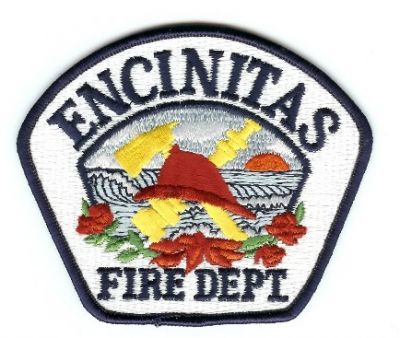 A new micro-fire station is coming to the north Leucadia/Saxony Canyon area to provide faster emergency response. I’m really pleased that our Fire Department and city staff were able to work with other parties to create an important public safety improvement while prudently managing the funding.

The “fast response” fire engine is being leased from the county for a dollar a year; and the Highway 101 site which formerly housed Cabo Grill (see photo below) is being provided by the landowner to the city at the same bargain rate. This is a great deal for the city and will provide enhanced public safety, both at the beaches and for residents and visitors in this area. More information is in this Encinitas Advocate story.

Advocating for cleaner energy in Encinitas

Under a CCE, we coastal cities would be able to substantially reduce our greenhouse gas emissions from electricity use, a large producer of carbon in the city. Moving to a CCE is a key part of reaching our Climate Action Plan goals, aimed at combating climate change.

The California Public Utilities Commission will soon be issuing a decision related to the calculation of what are called “exit fees” that will affect whether it remains financially feasible for a city such as Encinitas to form a CCE.

In San Francisco, I met with the staff members of CPUC commissioners. In the picture above, I’m with David Gamson, Advisor to the Office of Commissioner Martha Guzman Aceves.

During my meetings, I was able to deliver the main message that exit fees for leaving SDG&E seriously effect our ability to form a CCE.  From my perspective, the meetings were both interesting and successful. I’ll keep you up to date on our progress!

I spoke with Congressman Scott Peters before his welcoming remarks commemorating the San Diego International Airport’s 90th anniversary. Regional issues related to the airport are at times a focus at SANDAG, where I’m on the Board of Directors. Speaking personally, I’m eager to see improved public transportation options to our airport.

Encinitas is now even more beautiful

Pictured left to right with this graceful kinetic wind sculpture are artist Jeffery Laundenslager, Cheryl Ehlers and Daniel Camarena. You can see Jeffery Laundenslager’s other pieces at Scripps Hospital in Encinitas and from the I-5 freeway near Carmel Valley outside Ruth’s Chris Steakhouse, among other places.

Dropping the ball for charity

I was excited to again participate as a judge in the Encinitas Coastal Rotary Club Golf Ball Drop fundraiser to benefit the Navy Seal Foundation and other charities.

Listen to this – a helicopter dropped a whole bag of numbered golf balls over one hole and the three closest to the hole won. What a creative idea for a most worthy cause! Pictured are James Owens, 2018-2019 President of the Encinitas Coastal Rotary Club and Gretchen Mitchell, Golf Ball Drop Chairperson.

“When I first saw House of Cards on Netflix I thought it was improbable fiction…”
– Journalist Dan Rather, August 21, 2018

Isn’t this a cool map of SANDAG’s transportation plan? There are 10,000 connections to optimize mobility, efficiency, equity and sustainability. The high level goals are becoming the actual projects! @ 8:30 Fri. watch it on zoom.us/j/97246346524 ... See MoreSee Less

My campaign was in Oceanside this morning for a tour of West Coast Tomato Growers. It’s so great to see local businesses partner with the Vista Community Clinic to make sure migrant guestworkers get the vaccine. Our farmworkers perform the most sacred work there is, growing and harvesting the food we eat. I will continue to ensure every community has access to the lifesaving COVID-19 vaccine. ... See MoreSee Less

The opening of Olympus Park in Leucadia brings the City of Encinitas one step closer to the goal we set four years ago of having every city resident live within 10 minutes walking-distance of a public park. Parks are an essential part of the community here in Encinitas. Achieving this goal will help provide our residents with the opportunity to engage in activities that lead to a better quality of life that is close to home. ... See MoreSee Less

ENCINITAS — The recently opened Olympus Park brings the city of Encinitas one step closer to achieving the city’s yearslong “10-Minute Walk” parks advocacy campaign commitment. According to The Trust for Public Land (TPL), more than 100 million Americans do not have access to parks within a ...
View on Facebook
· Share

As your State Senator, I'll work tirelessly to help California equitably recover from the pandemic, generate well-paying jobs, and stabilize our climate.Please become a Founding Member of my campaign by making a contribution today! ... See MoreSee Less

Donate to Catherine Blakespear for Senate 2022

Hello! Thank you for stopping by. As we emerge from the pandemic, the challenges facing Californians have become starker – affordable housing, homelessness, health care, education, and climate change are all interrelated and require systemic solutions, not just political talk. Now, more than ever,...
View on Facebook
· Share